"Back to Work" is the third episode of Season Two of Superstore, and the fourteenth episode of the show overall.

A workplace accident threatens Amy's job, Glenn acts as a strict boss, Jonah tries to help Dina's relations with others.

Jonah and Amy are clocking in, discouraged over being back at work. Glenn is glad that corporate is gone until Jonah points out that district manager Jeff Sutin is still on site. In the Break Room, Jeff greets everyone with flowers, sympathizes with what everyone has been through and wants to know what corporate can do better. Pretending to be a "hard ass" boss to impress Jeff, Glenn walks in full of threats and admonishments. However, he gets tangled in an overturned chair and has to be helped out of it. In the store, Jonah and Amy start talking to Jeff about grievances but he interrupts them and says he wants to see the store at normal operations and then they can talk about how everyone can improve. Amy takes exception to this.

At customer service, Amy complains about Jeff to Jonah and Garrett and wants everyone to be at peak performance. Glenn is displaying his fake strictness to Jeff and won't let Janet go to the doctor but Jeff allows it. Toni works cash and the receipt won't stop printing. (♫ Nick Glider – Hot Child in the City ♫) Mateo tries to get Jeff to notice his work performance but Jeff is distracted, doesn't remember him and mispronounces his name. No one is working the deli so Amy and Marcus go in back to set up. Marcus wants to work the meat slicer and on the first pass cuts himself. He thinks it is just a nick until Amy shrieks and sees his thumb on the floor. He and Amy run around in a panic. (♫ Pat Benatar – We Belong ♫) Amy puts Marcus' thumb in a container of guacamole and tells him they are going to the hospital.

Dina catches a number of staff grumbling about her lack of loyalty during the strike. They pretend not to hear her so she says that Peter's wife has died. He says he's gay and not married. In triumph, Dina says she knew they could hear her. Jonah witnesses this, offers to help Dina get the staff to like her more which she says she can do herself. Amy tries to get Marcus out of the store and to the hospital but runs into Jeff and Glenn. She puts down the guacamole in a basket and distracts them but forgets the guacamole on her way out. In the Break Room, the staff discover that their lockers have been broken into. Dina has put condescending gifts in for them. This includes razors for Mary's moustache, deodorant for Mateo and a mug that says "Gay Guy" for Peter. They all walk away in disgust.

Cheyenne visits the store to show everyone baby photos but Amy blows by her in the parking lot to take Marcus to the hospital. Amy realizes they don't have his thumb. Henry has taken the guacamole and put it in a "go backs" cart. A customer thanks Mateo for helping her and seeing Jeff in the area, Mateo drags her over to repeat her praise in front of Jeff. The praise turns to derision and Jeff rebukes Mateo. Dina reads a draft of her apology letter to Jonah which is devoid of any remorse. Jonah suggests some changes so Dina tells him to write it. Cheyenne is showing photos of her baby to a group of staff who Amy grabs to help hunt down the guacamole with Marcus' thumb in it. She says they have 45 minutes to find it when they are interrupted by Jeff and Glenn so Amy pretends she is giving a tornado preparedness talk.

Jeff asks Amy to gather the staff in the Break Room which delays them from looking for the thumb. He says that things look good in the store and asks what corporate can do better. Jonah tries to make suggestions a number of times but Amy cuts him off pretending she wants to get back to work but really wanting to find the thumb. Dina stands up and reads the apology letter Jonah wrote but she hasn't pre-read it. Cheyenne opens a check-out counter for herself but this attracts a line-up of customers. Dina finds the apology letter weak and criticizes it to everyone's confusion. She ends up saying she's not sorry and insulting everyone. She tells Jonah that she doesn't need to be liked and doesn't care if he or others do have that need. A man and woman reach for hemmorrhoid cream at the same time and smile. (♫ Backstreet Boys – All I Have to Give ♫)

The staff scatter and try and find the thumb. Jeff and Glenn happen on a group discussing the search when a customer walks up with the guacamole and thumb. Cheyenne tries to juggle working checkout while talking on the phone to her baby but angers a customer. Amy is worried Jeff will fire her for the accident but Glenn says everyone will walk out to support her which Dina overhears. Dina finds out Jeff intends to file a report on Amy but Dina says she'll tell corporate that an untrained worker cut off his thumb while Jeff was in the store. Jeff doesn't file the report and says he hates Dina. Red-haired twins are putting on makeup. (♫ Berlin – The Metro ♫) Mateo confronts Jeff and expresses his frustration that Jeff hasn't noticed his attempts to impress him. Jeff holds Mateo's arm and says he's definitely noticed him.

Vianessa Castanos
as Customer at Checkout

“I want to see that appendix on my desk tomorrow young lady!”— Glenn to Janet 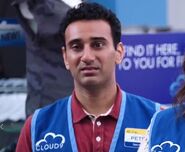 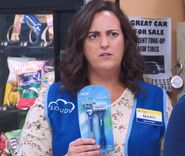