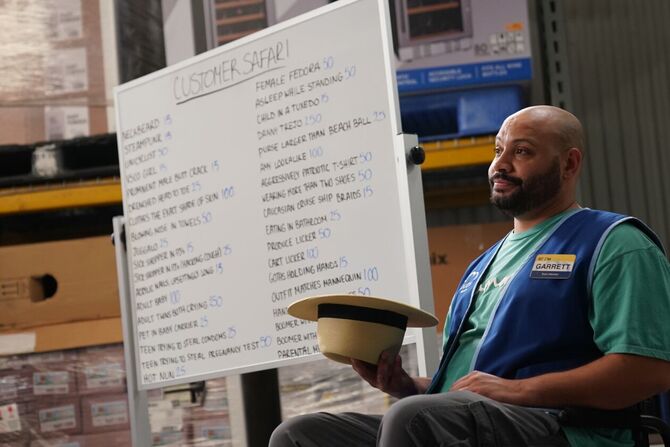 As Amy takes a day off to have lunch with Jonah's family and Dina has an in-store lunch with new fling Brian, Garrett rallies the employees to play a game of "customer safari" wherein they take pictures of the weirdest customers to earn points. Acting manager Glenn knows something is going on, but is clueless to stop it, so Dina enlists Brian to help her expose the game. At their lunch, Amy urges Jonah to stand up to his condescending brother, Josh, which leads to Jonah's parents splitting while Josh's girlfriend leaves him. When Amy returns to work, she gets a phone call and learns that Maya recommended her for a corporate director position in Palo Alto, California.

The episode starts with Amy being nervous to have lunch with Jonah's family. Garrett, Cheyenne and Mateo argue over which customer is weirder and this leads to Garrett starting a game called 'Customer Safari'. He ranks every random weird trait with allotted points for each and the winner would get a large amount of money, all they had to do was take a picture of the said customer and show it to Garrett who would allot the points. Meanwhile, Amy dislikes the way Jonah's parents praise his brother over him and Jonah allows them to do so. Amy wants to speak up but Jonah stops her saying that they should 'take the high road and be the bigger person'. Back at the store Dina's boyfriend, Brian, comes to visit and they sense that something is off with the employees. Glenn is clueless so Dina and Brian investigate and eventually catch them in the act when Brian came into the store carrying a pig and they tried to take a picture of him. At their lunch, Amy urges Jonah to stand up to his condescending brother, Josh, which leads to Jonah's parents splitting when Jonah's father's secret comes spilling out because of a misunderstanding while Josh's girlfriend leaves him.

At the end of the episode, Amy gets a call from corporate saying that she's been recommended for a corporate director position in Palo Alto, California.

Retrieved from "https://superstore-nbc.fandom.com/wiki/Customer_Safari?oldid=24690"
Community content is available under CC-BY-SA unless otherwise noted.