"Election Day" is the eighth episode of Season Two of Superstore, and the nineteenth episode of the show overall.

The store is a voting station on Election Day 2016 and Glenn and Dina are arguing where the voters should line up. Polling station worker Dorothy tells Dina they should open but Dina and Glenn fight over who should enter the code to open the doors. They both put in the code and are locked-out for 5 minutes. Jonah and Amy enter the Break Room to find election pamphlets from corporate. In Glenn's Office they complain to him that the pamphlets tell the workers to vote for a pro-business candidate and derides one who is pro-worker. Glenn doesn't see a problem with the pamphlet and mentions that no one read his emergency safety memo that details the store got an "F" in tornado preparedness. After Dina tells Cheyenne and Mateo to vote, Mateo confides to Cheyenne that he's an illegal alien. She suggests getting one of the "I Voted" stickers to fool everyone.

Jimmie Johnson crashes into a kid's car. (♫ Cheap Trick - Surrender ♫) As Dina is talking to poll worker Syd, Glenn interrupts with an urn of coffee. Syd goes to get a danish, Dina won't budge from the table Glenn wants to put the urn on and they spill the coffee into a polling box ruining the ballots. Dina runs away with the box. Amy and Jonah show the pamphlet to Garrett who doesn't care and find Marcus likes the pro-business candidate because he can relate to simple platitudes. Amy and Jonah decide to create their own pamphlet. Mateo tries to get a sticker from Dorothy but she won't give him one unless he votes. In Glenn's office, Dina and Glenn are drying the ballots with a hair dryer until Glenn brings in a large fan which blows them out his window. They go outside to search for them but the ballots are gone and Cheyenne sees them.

Amy and Jonah deliberate over the font to use in their pamphlets while Garrett mocks them. Cheyenne gives Mateo a sticker she made herself which he declares is garbage. A woman uses the voting booths as a change room. (♫ Madonna – Material Girl ♫) Dina cozies up to Cheyenne and asks if she knows of any illegal acts, to see if she knows about the ballots. Cheyenne thinks of Mateo's secret, says no and excuses herself. At a staff gathering, Amy and Jonah hand out their pamphlet and encourage the staff to vote for the pro-worker candidate. (♫ Rae Sremmurd – Start a Party ♫) They approach more staff including those in the Warehouse and watch as they vote pro-worker. Cheyenne warns Mateo that Dina may know about his undocumented status.

Amy and Jonah have a break and are practicing their Brooklyn accents. They complement each other and are having a good time. Exiting the washroom, Syd is stopped by Glenn and Dina who try to discretely ask him the penalty for voter fraud. When they find out it is severe they are alarmed. Amy is relating a story to Jonah when they are interrupted by an attractive woman who Jonah introduces as Naomi, whom he is dating. Jonah says he'll have to hand out pamphlets later and Amy appears a bit put off. As Mateo is throwing away garbage, he sees an "I Voted" sticker in the trash. He reaches for it but Roger pours nacho cheese on it.

Three kids get many of the "I Voted" stickers from a poll worker. (♫ Kim Wilde – Kids in America ♫) Glenn and Dina separately visit Marcus in the Warehouse to ask his advice as he's been in prison. Where two people have committed a crime that's been witnessed, he says that one should get the other confessing on tape for a reduced sentence. Amy asks Garrett and Mateo about Naomi and is a bit jealous. Mateo tries to takes Amy's sticker but ends up touching her breast. In Glenn's Office, Glenn and Dina try to get each other to talk about the ballot box incident while recording each other.

Naomi leaves the store and Jonah goes back to help Amy with the pamphlets. However, she now has Marcus taking Jonah's place. Marcus is bullying Myrtle and carries her to the voting station. Mateo buys Garrett's sticker and tries to explain but Garrett doesn't care and rolls away. Glenn and Dina are still at it and yell for Mateo and Cheyenne to get out of the office when Mateo goes to show off his sticker. The pro-labor candidate is elected and an elated Amy meets Marcus in the Break Room. They hug over the win and Marcus tries to kiss Amy. Syd and Dorothy notice the missing ballots but it's much less than the last election so they don't care. Dina and Glenn are now impersonating each other to get a confession.

Jimmie Johnson
as Himself 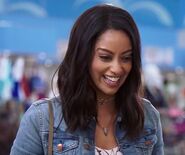