"Integrity Award" is the seventeenth episode of Season Two of Superstore, and the twenty-eighth episode of the show overall.

At the store front, Dina tells the staff to clean up the Break Room due to a roach problem. Glenn is excited to announce that nominations are being accepted for the company's new "Integrity Award". The winner gets a certificate, attends an awards dinner and Brett will answer questions on the nomination form. Glenn indicates suggestively that management can be nominated. Mateo says he probably can't be nominated since he's dating Jeff but no one seems to care. He's disappointed that everyone cared when Sandra pretended she was dating Jeff. Dina asks Mateo to use his relationship with Jeff to get an exterminator to help with the roach problem. Mateo agrees as he's anxious to show his influence with Jeff.

At the loading dock, Jonah catches Amy grinding the gears on a Cloud 9 Delivery Truck. He finds out she's using the truck to help her parents move and offers to drive. In Glenn's Office, Cheyenne tells Glenn she's going to nominate him for the award. He can barely contain his joy. A couple won't stop kissing in a check-out line. (♫ Mary J. Bilge - Sweet Thing ♫) Mateo phones Jeff to see if he can get an exterminator but Jeff doesn't want to show any special treatment. Dina asks Mateo if Jeff will help and he lies "yes" to project the illusion that Jeff is obsessed with him. Glenn catches Sandra nominating him for the award until Garrett bursts in the store having saved a dog stuck in a snow bank. Sandra changes her mind and nominates Garrett which causes Glenn to see Garrett as a threat.

Jonah and Amy arrive at Amy's parent's house. Jonah is excited to ask embarrassing questions about Amy but she says her parents are at the new house or else she would never have brought him. However, Connie and Ron are home and there's lots of packing left to be done. Ron doesn't seem too concerned and Connie is going through old items. Amy wants Jonah to leave but he dives into looking at photo albums with Connie. Glenn talks to Garrett about the award and since Garrett doesn't care about it, he announces on the store's P.A. system that he doesn't want to be nominated. Dina leads Mateo (disguised as an exterminator) into the Break Room to fumigate. Jonah is getting way too chummy with Connie so Amy tells Ron that Jonah loves art. Ron has a room filled with portraits he's painted of celebrities. He tells Jonah he can take one which he reluctantly does, then Ron wants $30 for it.

Glenn pressures Cheyenne to write a longer award nomination for him. In the Break Room, Mateo lets off a bug bomb but isn't impressed with the discharge so he lets off more. Two customers crash their carts. (♫ Cyndi Lauper - I Drove All Night ♫) Since Dina believes Mateo was successful in using his influence with Jeff to get the exterminator, she gives him a lot more tasks. The owner of the dog Garrett saved is an elderly war veteran which draws him great praise from the staff and makes Glenn see Garrett as a threat for the award again. At the Sosa's house, Ron is hungry which prompts Connie to start opening boxes so she can make tamales. This drives Amy over the edge so she retreats to her old room which hasn't changed since she was in high school. In Glenn's Office, corporate praises Garrett over the phone which results in Glenn deriding him. Out of spite, Garrett makes an announcement that he will accept nominations for the award.

Jonah joins Amy in her bedroom which is decorated with many pictures of Scott Wolf. He notices he and Amy have a lot in common from high school including being on the debate team and liking theatre. Glenn again pressures Cheyenne but this time it is to write an impressive lie on the integrity nomination. A customer leaves many milk cartons on the floor outside the refrigerators. (♫ Cinderella - Don't Know What You Got (Till It's Gone) ♫) At the Sosa's, Ron goes to Amy's room and says her cousins have shown up. Amy believes the packing will never get done until Jonah says she should just leave it to her parents to do and go. They climb out the window. In the store, the smoke from the bug bombs is seeping out of the Break Room.

Glenn is complaining to Garrett that him saving the dog has taken him out of the running for the award. They both get teary but don't know why and later their noses start to bleed. Dina is showing Mateo massive store overhaul plans that she wants him to get Jeff to approve until they start coughing and see clouds of smoke entering the store. Now in the delivery truck, a weight has lifted from Amy and she and Jonah are singing as they drive back to work. (♫ Seasons of Love ♫) They arrive back at the store to see it being evacuated. Amy says the staff can handle whatever the problem is and they drive away to have lunch. Emergency workers mill around the parking lot as Jeff approaches Mateo. Jeff has made their relationship known to corporate but in order to prevent conflicts of interest, he says Mateo must transfer to another store. Amy and Jonah eat lunch in the truck and discuss their 90's celebrity crushes.

“Oh Jonah, so sweet, so dumb. Do you actually think I'd bring you along if my parents were here?”— Amy

“This was not just a crush, there's a darkness here.”— Jonah on Amy's Scott Wolf crush 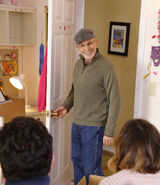