Lauren Ash stars as Dina Fox, the store's strict, over-bearing assistant manager on Superstore. She is a Canadian-born actress from Belleville, Ontario. She is also an alumni of both Second City Toronto Mainstage and Second City Chicago mainstage and is one half of sketch comedy duo "Cory!". She is a two-time Canadian Comedy Award winner for Best Female Improviser in 2006 and 2007 and has also won for Best Performance by a Female - Television for Almost Heroes in 2012, Best Comedic Play in 2008, Best Sketch Troupe in 2006, and in 2015 won Best Female Performance in a Feature Film for her role as Carol in the movie Dirty Singles.

Ash has played various roles in Scare Tactics as well as the Canadian TV series Almost Heroes. She had a recurring role in The Ron James Show and made guest appearances in Lost Girl, Cracked, Bomb Girls and Call Me Fitz. Other film and television credits include Video on Trial, Hotbox and the Academy Award-nominated film Lars and the Real Girl. She was also the voice of Sam in the animated Canadian series The Dating Guy. She was main cast in the American sitcom Super Fun Night alongside Rebel Wilson and Liza Lapira. She previously appeared in the first season Comedy Central series Another Period as Hortense, having taken over the role from Artemis Pebdani who played her in the pilot. 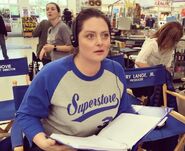