"Part-Time Hires" is the third episode of Season Three of Superstore, and the thirty-sixth episode of the show overall.

Emma gets a job at the store and Amy asks Jonah for parenting advise. Garrett and Dina argue over who broke up with whom, a cute construction worker flirts with Mateo, Cheyenne and Carol for store perks; Kelly has a rough first day.

In the Break Room, Glenn welcomes Amy's daughter Emma as the newest part-time employee. Cheyenne plays a video presentation of Emma that Glenn narrates. (♫ Elton John - Your Song ♫) Emma is embarrassed and questions Amy who had nothing to do with providing the pictures. Glenn says he keeps copies of all photos employees have developed at the store. Everyone applauds and exits as Glenn also announces that Kelly has started working at the store. She tries to introduce herself but is ignored. In the store, Mateo asks a construction worker about Scott as Cheyenne watches. Mateo plans to bump into Scott when he comes into the store.

Jonah tries to converse with Emma until Amy orders Emma to clean up the dressing rooms. Emma groans as she leaves which prompts Jonah to warn Amy that if she's tough on Emma, this will make her ex Adam the "good guy". Jonah relates that when his parents divorced, he became closer to his Dad due to his niceness. Amy believes it is her role as a parent to instil disciple in Emma. A customer stocks up on behind the counter Pharmacy items. (♫ Chaka Khan - Sweet Thing ♫) At customer service, Dina tells Garrett that she hasn't been having sex with him as she's dealing with her anxiety issues and seeing a shrink. Garrett offers to take a break from their relationship which she accepts.

Kelly asks Mateo for advice but he sees Scott and shoos her away so he can flirt with Scott. Amy discovers that Emma and Adam have been spending a lot time together which prompts jealousy and a movie invitation which Emma declines due to plans with her Dad. Amy runs to Jonah for advice and agrees she needs to be nicer until Emma likes her better than Adam. In the Break Room, Cheyenne, Glenn and Justine try to console Garrett as they heard from Dina that she dumped him. He's outraged and says it was a mutual decision. They shake their heads sadly at him. Amy tries gossiping with Emma until a customer starts yelling at Emma. Amy shouts him down which Emma finds awesome. Scott and Mateo are flirting and on departing, Scott asks for Mateo's employee card so he can use the employee bathroom. Mateo relents and Cheyenne suggests he's being used but Mateo thinks Scott is truly interested in him.

Garrett confronts Dina over her telling everyone she dumped him when he thinks it was he who suggested the break but isn't able to change her opinion. While mopping, Emma shares a secret so Amy lets her leave the floor wet. Justine slips on the wet spot and lands on her face. Amy tells Jonah she's angry with herself for trying to be friends with Emma and that it's OK for Jonah to be strict with her. Scott is disappointed when he asks for Mateo's employee card again and Mateo refuses. In the Warehouse, Carol helps Kelly and then tells her creepy plan to steal Jerry away from Sandra which causes Kelly to recoil. Emma shelves items in the wrong area and won't listen to Jonah so he follows Amy's direction and yells at Emma. Glenn interjects, yells at Jonah and tells him to stay away from Emma while she smiles behind Glenn's back.

Scott helps a reluctant Cheyenne load some ice and without him asking, she says she won't share her employee ID. He turns on the charm and after she sees his sculpted body, Scott enters the employee bathroom and shows Mateo her card. A 3-D printer is shown with a warning sign. (♫ Ace of Base - The Sign ♫) Garrett brings his problem to Jonah who is overly enthusiastic and this results in Garrett turning away. Jonah seeks Garrett out at customer service and apologizes for not being able to help and suggests they plan a roommate movie night over a few beers. Garrett isn't impressed with this plan so over the P.A. system tells everyone it was his idea to break up with Dina and that she's seeing a shrink, which he immediately regrets saying.

Amy shares her concerns about Emma with Glenn. He gets her to realize that Emma's churlish behaviour is normal for a teenager so Amy can go back to being strict with her. Cheyenne and Mateo watch as Scott is now flirting with Carol who puts her employee card down her blouse to his concern. They wonder why he needs to go to the bathroom so much. Garrett apologizes to Dina who tricks him into getting back together and then she immediately breaks up with him and announces it over the P.A. system. Much to her surprise, Glenn congratulates Kelly on a great first day. He then informs her that she won't be paid for the day as she didn't clock in.

“Yeah, see, Latino parents are different. We don't really need our kids to like us. We just break their spirit so the world doesn't.”— Amy 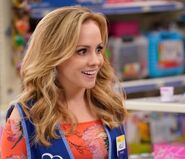