"Sandra's Fight" is the twenty-first episode of Season Four of Superstore, and the seventy-fifth episode of the show overall.

Amy and Dina visit Cloud 9 corporate to fix problems caused by Sandra's misguided activism, while Jonah tries to sabotage an employee meeting and Garrett tries to prove to his co-workers that he's a good person.

In the Break Room, Amy tries to get staff to do work once they've clocked out. Carol asks why Sandra is still at work, after being fired, which Amy explains that due to Sandra's union activities, she's been reinstated. Sandra expresses her hatred for management which Marcus applauds. In the store, Amy and Jonah wonder if Sandra's union stance is just so she can get attention. A man with a cut hand shops for gauze. (♫ Bob Marley & the Wailers - Jamming ♫) Cheyenne, Glenn and Mateo scold Garrett for not revealing to Dina that he was responsible for releasing her birds and, sleeping with her afterwards. Accusing him of being a mean person, Garrett seeks solace from Jonah who doesn't given him any.

Skyping with Jeff in her office, Amy learns that Sandra's union activities could result in the store being turned into a distribution center. Sandra hangs up "Rise Up" posters. (♫ Erasure - A Little Respect ♫) In the Warehouse, Amy asks for Dina and Jonah's help in quietly stopping Sandra from speaking about unionizing which Jonah is uneasy with. Trying to show he's a good guy, Garrett brings Myrtle her shawl. However, Glenn doesn't see Garrett's gesture so Garrett tries to take the shawl back which Glenn interprets as Garrett being mean. While Sandra is handing out flyers, Amy and Jonah gently try to stop her. Telling her that corporate is viewing her activities as a threat spurs Sandra into climbing on top of a checkout counter and announcing a union meeting that evening.

In Break Room, discussion of unions involving Marcus, Justine, Sayid and others results in Dina shutting down the room. The Myrtle hologram runs out of battery power. Amy learns from Jeff that the store is being shutdown but she convinces him to set a meeting with the corporate executives, so she can change their minds. Taking Dina with her to Chicago, she asks Jonah to attend the union meeting and ensure it doesn't get out of hand. The union meeting is held in the store after hours where Sandra introduces labor organizer Robin Green. Living in the store, Marcus stumbles into the meeting in his underwear. At Cloud 9 Headquarters, Jeff meets Amy and Dina in the lobby and tells them that VP Claudia Lankow is the person to impress. Dina effuses over the company's history display.

At the union meeting, Robin tries to engage the staff with a "union" word association exercise which Jonah puts a negative spin on. Many of the staff start inane associations with other words. In Chicago, Amy and Dina tell Claudia and the other executives that the union talk is only coming from Sandra, who is harmless. Told that the choice was to close their store or Bel-Ridge, Amy and Dina bad mouth Bel-Ridge. Robin lets Sandra hand out union cards and has to clear up confusion with them. Jonah continues to be negative and is accused by Sandra of being anti-union because he's sleeping with Amy. Jonah points out several realities such as retail dying and that the staff have no education. Saying their current conditions are the best most of them will ever get, it puts a damper on everyone's enthusiasm. However, he feels guilty for going against his beliefs.

In Chicago, Claudia calls district manager Laurie on speaker phone and asks her opinion which store should be shut down. Not knowing Amy is in the room, Laurie starts to malign Amy but before she can say her name, on purpose, Amy spills a drink. Announcing herself to Laurie, Amy blames the spill on having too many Cokes (the beverage) while subtly making reference to Laurie's cocaine addiction. Sighing, Laurie says to close the Bel-Ridge store. The union meeting over, Robin isn't interested in having future contact with Sandra, who still wants to meet. Glenn rues the lost opportunity to Jonah, which makes him more guilty. Back at the store, Dina tells Cheyenne and Mateo about Cloud 9 HQ.

While stocking shelves, Garrett asks Glenn about Rose, bringing a threat from Glenn for Garrett to stay away from her. Garrett is able to convince Glenn that he does good things in secret while Glenn lies about anonymously donating a kidney, which he calls Jerusha about. Amy tells Jonah to give her details of who was most ardent at the union meeting so she can monitor them. Refusing, he accuses her of looking after her own job but immediately apologizes. Guilty that he killed the momentum behind forming a union, he welcomes Amy back but she can see he's not happy. As Sandra unsuccessfully tries to get Joanna to sign a union card, Jonah completes one and gives it to her.

“I'm just saying retail is dying. And we're already being replaced by machines that can do our jobs better and faster than us. And, and most of us have no education, no skills, and are just generally terrible. No offense.”— Jonah 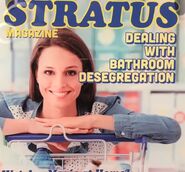