"Strike" is the second episode of Season Two of Superstore, and the thirteenth episode of the show overall.

The staff strike to get Glenn his job back, Garrett meets a gorgeous woman, Dina tries to break the strike.

The staff have walked out in protest over Glenn being fired and Dina has told them the store will be fine without them. Glenn starts raspberrying Dina, everyone cheers and then goes silent, wondering what to do next. A Cloud 9 corporate car pulls up carrying district manager Jeff Sutin who goes into the store. Jeff introduces himself to Dina who indicates she has resumed her old role as assistant manager. He asks her to get the walk out leaders to come into the store to meet with him. To the staff's boos, Dina asks Jonah and Amy to meet in the Break Room.

Amy and Jonah talk to the staff and he suggests that they ask for more than getting Glenn his job back. Jonah suggests health insurance, Sandra wants paid overtime, Dougie wants to vape in the store and Myrtle wants the store to be closer to her house. Amy wants to focus on re-hiring Glenn. Jonah and Amy march into the store and change into business suits. (♫ DJ Khaled - All I Do Is Win ♫) In the Break Room, Dina yells that they do not negotiate with terrorists while Jeff asks what the staff want. Amy asks for Glenn to have his job back and Jeff agrees. However, he says that employees have to sign an apology letter. This angers Amy who lists grievances. Jeff mocks the walkout which results in Amy and Jonah leaving and announcing a strike to the staff.

The next day, Amy and Jonah admire the staff in a picket line, dressed in red "Boycott Cloud 9" shirts. In the store, Dina tells Jeff that she slept in the store all night and that she's going to break the strike. Jeff says he can't ask her to do this which she takes as silent consent. On the picket line, Garrett notices an attractive woman (Nikki) who's not an employee. He rolls up to her, makes a joke and they connect over a mutual video game interest. Mateo runs in the store, fakes he is working in front of Jeff and then runs back outside. Dina approaches the picket line with a hose and announces she's going to break the strike. When she tries to spray water, a gentle stream and then a mist comes out and everyone laughs. Elias gets a bad sunburn. (♫ Earth, Wind & Fire - Shining Star ♫)

A news crew shows up and reporter Mo Frank interviews Amy as to the reason for the protest. A number of other protesters have gathered on the parking lot and she is slow in getting to the point. Amy is interrupted by Maggie who is protesting transgenders using the store's bathrooms. As Amy says this is not the issue, another protester interrupts who wants statehood for Puerto Rico. Amy finally gets out that the strike is about worker's rights, that Cloud 9 is a rat and points towards an inflatable teddy bear, which was supposed to be a rat. This ends the interview. Jonah notices Nikki in the transgender protest group. Garrett says he knew there had to be a catch with her.

Dina returns with a pressure washer and demands that the group disperse. Everyone expresses concern over the lethal nature of the washer but Dina goes ahead and ends up breaking two windows in Glenn's car. She's regretful but accidentally sprays more causing everyone to run for cover. Judy checks a sleeping Myrtle's pulse. (♫ Cameo - Word Up! ♫) Customers are still shopping so Amy suggests the strikers go into the store and stop them. (♫ We Are Wolves - T.R.O.U.B.L.E. ♫) Garrett uses the P.A. system to warn customers about spiders in produce, a powerful raccoon and bedbugs in the store. Freezers are opened, Mateo discourages purchases, Travis coughs on customers and Glenn tips over a display. Amy stands on a table and asks customers to support their boycott. The strikers exit the store enthused.

Cloud 9 workers from the Kirkwood store enter the parking lot so Amy thinks the strike is spreading. However, they are there to replace the strikers. Jeff tells the strikers that anyone who will sign the apology letter gets their job back, including Glenn. Jeff mistakes Brett for Glenn as he says Brett has an air of authority. One by one, staff go back to work. Garrett asks Nikki how serious she is about the transgender issue. She's firmly against it and uses her breasts to make her point which doesn't make it easy for Garrett to reject her. A child's head is stuck in a chair. (♫ Jermaine Stewart - We Don't Have to Take Our Clothes Off ♫) Garrett tells Jonah that he plans to have sex with Nikki and try and teach her tolerance. The strike peters out until only Amy and Jonah are left. They agree to end the strike...for now.

Stephen Jared
as Another Protester

“Why isn't there a setting that hurts people?”— Dina 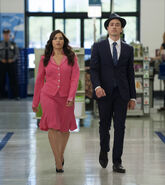