In Glenn's Office, Glenn is on the phone with Amy who is calling in sick. Dina overhears and tells Glenn she is faking. Amy is faking to see a movie with daughter Emma. Amy hides as she sees Jeff outside the theatre and to her surprise, watches as Mateo appears and kisses Jeff. The next day in the Break Room, Dina tries to get Amy to confess she was faking being sick. Amy asks Sandra how Jeff is doing and Sandra continues her lie that she and Jeff are dating. The store's Wellness Fair has started featuring medical advice and screenings. Jonah tells Glenn that he wanted to be a doctor and when Glenn says he did too, Jonah's reaction insults Glenn who leaves. Elias dresses a mannequin in a doctor's jacket. (♫ The Fixx - One Thing Leads to Another ♫)

Amy tells Cheyenne and Garrett that she saw Jeff with Mateo and wonders if she should interfere since she believes Jeff is dating Sandra. Cheyenne and Garrett already knew the secret and Garrett is adamant that she shouldn't get involved. Glenn talks to the Fair's nurse named Ella and shows his annoyance when Jonah shows up with cups for a juice station Glenn set up. Glenn believes juice is healthy until both Jonah and Ella dissuade him from this belief. Jonah and Ella discuss health films in detail and Glenn feels left out. Dina tries to find out from Garrett if Amy was playing hooky the day before but Garrett won't tell. Amy confronts Mateo and finds out the truth - that he has been dating Jeff all along and Sandra has been lying. Unfortunately, Sarah overhears and starts telling others.

Amy has no sooner finished talking to Mateo when Marcus tells her the news. Amy asks Cheyenne and Garrett why they didn't tell her the truth about Sandra. They didn't want to damage Sandra's low self-esteem. Amy thinks she can fix things if she gathers all the staff and tries to protect Sandra's feelings. Again, Garrett tells her to do nothing. Sandra photoshops a picture of her and Jeff in Paris. (♫ The Cure - Friday I'm In Love ♫) Glenn is having difficulties with an exercise bike and refuses Jonah's help. Dina grills Mateo if he knows where Amy was the day before to which he nervously replies no. Seeing the staff gossip, Dina says something is going on. In the Break Room, Marcus, Myrtle and Justine are talking about Sandra.

Amy tries to change their negative opinions about Sandra by lying. Cheyenne lies that Sandra is pregnant just as Glenn enters the room. Amy asks everyone to keep this quiet but Glenn wants to plan a baby shower. Much chatter ensues and in frustration Amy says Sandra isn't sure she's going to keep the baby which elicits shock from Glenn. Glenn takes Sandra through the maternity section and not so discreetly sees how she feels about babies. At Coffee & Bakery, Mateo has found out the pregnancy lie and asks Amy and Cheyenne how they are going to fix it. Marcus is collecting for Sandra's baby shower. Glenn is making Sandra rock a baby doll and then puts it in the garbage to illustrate abortion. Jonah sees this and objects to Glenn forcing his views on Sandra and an argument on abortion breaks out between them. A sweaty man uses deodorant and then puts it back. (♫ Everclear - I Will Buy You a New Life ♫)

As customers stop to watch the argument, Amy steps in and announces that it was a skit. Glenn starts to swoon and complains of dizziness. Jonah sits him down and tries to help him but Glenn refuses. In the Break Room, Glenn is better and explains the problem was low blood sugar as he cut down on the amount of juice he drank that day. Jeff has arrived and criticizes the abortion argument. Glenn shoots back that Jeff shouldn't be giving lectures about responsibility given that he impregnated Sandra. Sandra says she's not pregnant and Jeff is confused as he doesn't know Sandra and he announces that he's gay. Sandra also admits that she made the relationship with Jeff up to get attention and Glenn can't believe Jeff is gay. Mateo blurts out that he's been dating Jeff which Jeff asks everyone to keep secret. Dina says she and Garrett have been having casual sex.

Glenn wonders what has happened to everyone at the store and Amy takes the blame for telling all the lies. She apologies to Sandra but Sandra is fine with things, she's relieved that she can stop sending herself presents. Jonah is upset that Garrett didn't confide that he was having sex with Dina. A man unknowingly knocks plates off a shelf. (♫ Tom Cochrane - Life Is a Highway ♫) In the dressing rooms, Jeff and Mateo talk and are glad the truth is out. They both wonder why they are still hiding in the dressing rooms and whispering. They walk out holding hands and Mateo tells a customer that Jeff is his boyfriend. (♫ Stereo MCs - Sofisticated ♫) Amy teases Garrett about having sex with Dina so he tells Dina that Amy was playing hooky from work the day before. Outside, Jonah sees Glenn holding a cigarette and makes an apology of sorts to him. A Cinderella carriage pulls up which Sandra couldn't cancel and takes her to the mall.

“Glenn, I love Amy like a sister, and she is a liar and a fraud, like my sister.”— Dina

“I hate Paris. That place is just one giant gay ashtray.”— Dina

“Look, you don't know the situation. This is like Jurassic Park. You start messing around with something you don't know anything about, and before you know it, you're getting bit in half while you're sitting on the toilet.”— Garrett 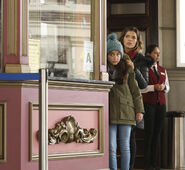